Scott George and I launched from the new Emery Bay Park created just to the west of where Ashby Ave. meets Interstate 80. A little parking lot on a point of land jutting out into the bay with a wooden bench forms the park adminstered by the East Bay Regional Shoreline. A nice little pocket beach made for easy launching.We paddled out and turned South under the Bay Bridge. Paddling across Oakland Harbor, 2 tugboats were readying a container ship for departure. I paddled under a pier on the West end of the harbor. We encountered the strongest ebb current (about 2 kts) of the paddle on the North side of the entrance to the Oakland Estuary. After looking both ways we crossed the entrance and landed on Whalebone Beach on the Western end of Alameda Island. 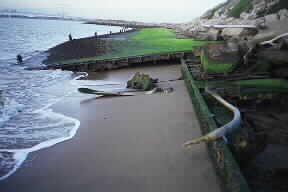 and were rewarded with a beautiful sunset 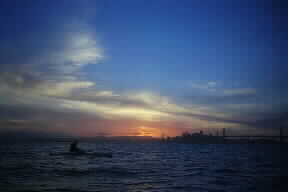 We arrived at the take-out and discovered that this beach has a sandy bottom during the negative low tide so take out was easy.

people have visited this page since it was created January 17, 2000